by Monice Mitchell Simms on April 5, 2020 in Address: House of Corrections, Independent Publishing, On writing 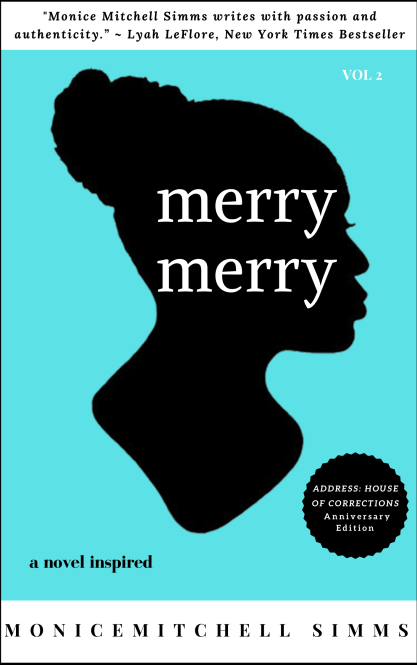 Fam, I was raised in the Baptist church (Corinthian Baptist Church in Detroit, to be exact) and as a result, so was my novel’s protagonist, Merry Paine.
Here’s a peek into what my March and April books of the month, “honey bee” and “merry merry” – the first and second of three novellas I’m publishing to celebrate the 10-year anniversary of my debut novel, Address: House of Corrections – have to offer. Hope it entices you to buy. 🙂
“Oh, Lord, you been so good to me…Hallelujah…So good, Jesus…So good…So good…”
Merry heard the mumblings before she realized where the voice was coming from.
A massive Colored woman was sitting on the pew alone in front of her. She was moaning and rocking, moving the wooden pew with each heavy sway. Wouldn’t be long now before she…
“Thank ya, Jesus! Thank ya! Thank ya! Thank ya! Thank ya!”
The large woman leapt to her swelled feet, her fat head rolling back and forth, round and round as if her thick neck was made out of spaghetti.
Spent, she threw back her head and fell back as if the sanctified air, itself, was going to catch her.
Merry scurried to run out the aisle, but couldn’t. Excellent was in her way, holding up one of the large woman’s gigantic arms and cradling her head.
Gently, she eased the limp woman back into her seat, pulled off her glasses and started to hum.
“It’s alright. Ain’t nothin’ wrong in callin’ is name.”
Thanks for reading. You can buy both books here: http://bit.ly/AHChoneybee & https://bit.ly/AHCmerrymerry

← Getting Stronger
A Easy DIY Face Mask! →
Fam, it truly takes a village to create a docuseries -- Especially one that explores three countries in 47 days!